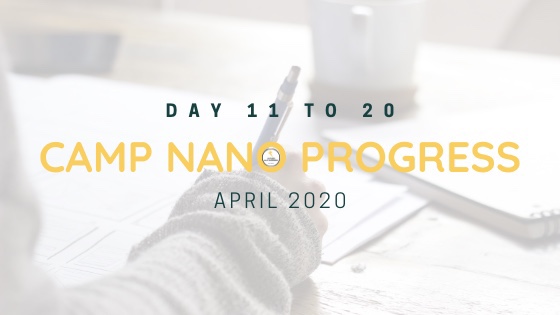 I started off by celebrating how well the first 10 days had gone by watching Contagion with my husband.

Chapter 5 and 6 needed more work than I expected. This slowed my progress and affected my motivation. I got them done but I felt like I was getting nowhere fast.

Then, I literally was getting nowhere. I was so exhausted in the evenings that I wasn’t doing any editing. I read. I attended online writers meets. But, I wasn’t editing. I realised I needed a break and took a night off to watch The Quiet Place with my hubby.

I’ve been using Google Docs and a Trial of Dabble Writer. I really love Dabble writer but can’t use it on my mobile. On the last day of my trial, they released the Dabble Writer App for mobiles. I really liked it and was very tempted to buy it.

I finished day 20 by completing my edits for chapter 7. I’m frustrated with myself as it’s not as far as I’d hoped for.

I have two cats, Evie and Gracie.

Evie has the nickname Evie Knievel for all her dangerous antics and vet visits as a kitten. She thought she was the neighbourhood vigilante. Thankfully, she is more chilled now.

Gracie looks very elegant, like a Burmese Blue but she’s just a moggy and shows her true colours when she’s fed. Greedie-Gracie-Guzzlechops sings for her super and scoffs it down like a pig, with the snorting noises.

There are so many but I thought it might be fun to make my own up.

Here is my “Aspiring Indie Author” meme, inspired by the ‘What I do…’ memes.

When did you decide you wanted to be a writer?

Age 5. As soon as I learned books were written by someone, I knew I wanted to be that someone. My first stories would be classed as fan fiction as they featured characters from Orchard Tree books and were about more magic key adventures.

I think I’m a Plantser. I’m somewhere in the middle.

For a long time I would just pants my way through a novel. Sometimes I’d write a brief outline. But, I was just writing for fun, for me, and it didn’t matter if it was any good.

It wasn’t until I decided I would try and publish that I realised what a mess my manuscript was in. And how much I hate editing. I realised I need to plot more to reduce editing.

I invested in Save The Cat and it showed me how to plot. It’s been a game changer and I now use it before starting a novel. I still write a brief outline and only plot one Act at a time, not the whole novel.

I like the freedom of pantsing too much to plot every detail. In my plotting, I still allow myself some gaps to fill. An element of surprise is the fun part of creating.

Mid–Month Check In – How’s It Going

I’ve spent a long time chasing the Traditional route. It appealed because I wanted validation from someone in the industry. I wanted someone to support me with guidance on what to do when and with access to the resources I needed. I wanted publishing and marketing done for me.

But, now, I am pursuing indie publishing.

As a member of World Indie Warriors I am not alone. Many other members have published successfully before me and are willing to share their experience on what worked (or didn’t) and the best resources. I am also doing Pagan Malcom’s Story Seller Academy course which is full of useful information. I now struggle with time to digest it all but I know what I’m doing or who to ask for help.

The biggest hurdle was a change in mindset. The moment I decided I no longer need validation to be good enough because I know I am. With that, I no longer needed permission to publish. I will publish when I want.

As for the marketing… it turns out I really enjoy it. I love talking about my writing and connecting with others. I love sharing book reviews and recommending books. My creative side loves making images to support my content. One day, I’m hoping to make videos too.

It is hard to find the money to invest in myself but when someone says, “What do you want for your birthday?” My answer is money. It goes in my publishing pot. I keep adding to it. It’s not much but little by little it grows. One day, this pot will by my published book(s).

#FactFriday – Tell us something interesting about yourself?

I am a natural redhead. I now love my hair and embrace it as part of my identity but that wasn’t always the case.

My favourite folk story is about the green children of Woolpit, Suffolk. During the 12th Century, a boy and a girl appeared. Nobody knew where they came from and they could not speak a word of English. But, the most bizarre detail was that they had green skin and would only eat green beans.

As they learned to eat different foods they became a more normal colour. They were baptised but sadly the boy died shortly after. The girl learnt to speak English and told of the place she came from called Saint Martin where everyone was green. The girl was called Agnes and married Richard Barre.

I discovered the story because I fell in love with Michael Talbot’s faeries. I’ve collected many. The original three were my favourite and has green skin (but, I only own one of these). When I learned the factory allowed tours, I planned a day out for my mum and boyfriend to come with me. We saw the faeries being made & hand painted & their delicate wings crafted. Afterwards, we visited the local church when I happened upon a leaflet about the Green Children of Woolpit.

My favourite film is Labyrinth. I discovered the artist behind the film was Brian Froud. I bought his books and one of them contains a story about The Green children of Woolpit.

The Green Children are special to me. They inspired two of my favourite artists and filled my heart with wonder.

If you ever switched genres, what would you switch to?

I’ve written most genres but there are some that I’d like to give more attention.

I like magic, fantasy and sci-fi in stories so I am unlikely to write a novel that is a cosy mystery, crime or a thriller. But, I’d never say never.

I would love to see your answers to the above. Let me know if you are taking part on IG or posting somewhere else.

Book Review: Save The Cat

Behind the Book: Sorceress of Truth by J D Groomuh