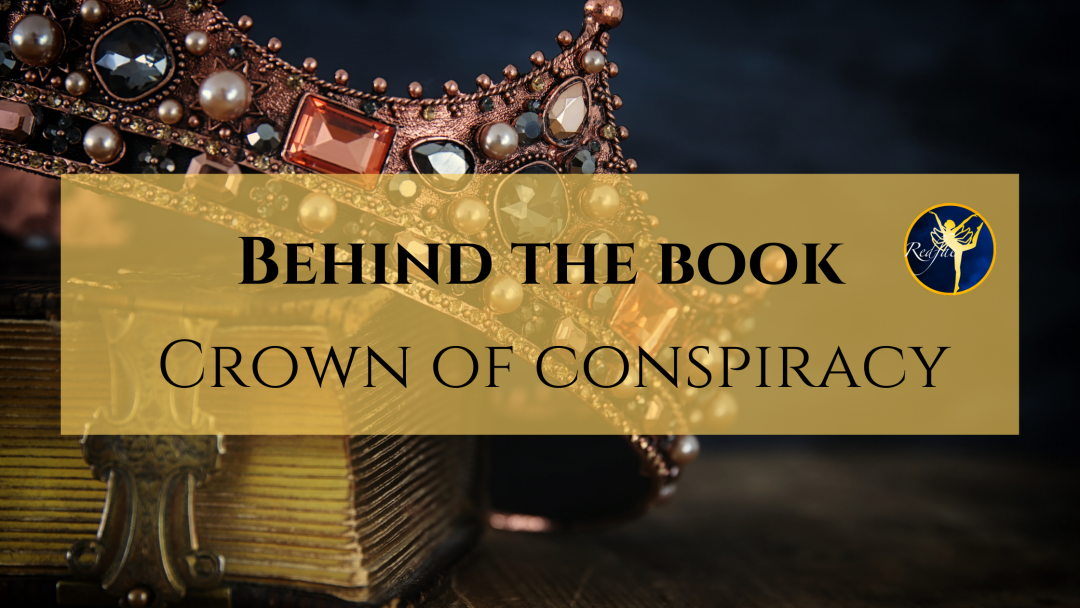 What genre is Crown of Conspiracy and can you name any similar books?

Crown of Conspiracy is a court-intrigue high-fantasy book, although I’ve heard it called epic fantasy as well. I’d say it’s new adult, others have said young adult, but because I know where book 2 is going, YA is out of the question.

Similar books I think would be by Trudi Canavan (Age of the Five, the Black Magician trilogy), perhaps the Kushiel Series by Jacqueline Carey. I think my writing style has certainly been inspired by these amazing female authors.

What inspired you to write Crown of Conspiracy?

Writing Crown of Conspiracy started out as a challenge to do NaNoWriMo 2018. I had no idea what to write, until I remember the four lines of the prophecy I came up with over 15 years ago. I remembered the MC (Shalitha) of the story idea I had way back when and decided to roll with it.

When I started writing, I had no idea where the story would go. In fact, it took me writing a first draft, and a second completely different draft to get a much clearer idea.

How long did the first book take to write from the first idea to publishing?

Eight months. I started writing CoC, as mentioned before, during Nano 2018, and I published the book in June 2019.

Currently, I anticipate 4 full novels in the Ilvannian Chronicles, but I wouldn’t be surprised if I end up writing novellas too from the PoV of side characters; or novellas of events that happened in between the main books. I already have ideas for that.

Oof, hard. I’m a pantser, so I write as I go, which means my world is built as I go. What I try to do though is draw inspiration from cultures we have around the world and give it my own twist.

I know there’s tips out there which go as far as thinking about the sewage system and where waste goes, which is totally fair, but I wouldn’t get to that until the end, and here’s why. The chances of you writing about that, unless your characters have to escape through said system (for example) aren’t as high as for example learning about their way of life. My tip would be to think about HOW the world around your character influences them and go from there.

Characters and their surroundings go hand in hand; their immediate surroundings create their beliefs, their morals, their values. Think about those first, and continue onwards.

I loved the MC, Shalitha. She is such a strong character. Who inspired the character?

I’m glad you did! I think she goes two ways. People either like her, or don’t. Some people see her as strong, others as weak—to me, she’s both. She’s not infallible. She makes a lot of rookie mistakes in book one, and then tries to deal with the outcome as best she can.

As for who inspired her… I think in a way, I modelled her a lot after my own experiences, or rather, someone I would like to be in the future; strong, a fighter, someone who doesn’t do nonsense, fuelled by sarcasm and witty remarks while still able to care and love.

Please share a snippet or teaser from the book.

Having something to do took my mind off the worst of things. When I picked up a book to place it back on the shelf, a piece of paper fell out. I nearly dropped it when I saw what it was—a clear overview of names with suspicions scribbled below them. Xaresh had found out much more than he’d led me to believe.

A knock on the door alarmed me and I spun around to see Evan sticking his head around the corner, a smile on his face. I folded the piece of paper behind my back and tucked it deep inside my boot.

“Is everything all right?” he asked with a frown as he saw me hopping around on one leg. “Eh, Elara said you’d be here.”

“I’m fine. Got something in my shoe.”

Tell me about a typical day in the life of Kara S. Weaver?

A typical day in my life? Hah! Welcome to the madhouse.

A typical day for me would be a work day, I guess, where I get up between 5 and 5.15 am, shower, dress, and slap on some make-up so I only look like half a zombie. I prefer getting up before my husband and kids so I can wake up properly without anyone harassing me. I am a morning person, but 5am is pushing it. My husband and kids wake up 6am; I dress them while he gets ready. At 6.45am I leave the house for work. It’s a 45 minute drive, but I don’t mind it as much. It gives me time to think, listen (and sing) to music, plot, whatever.

Then I teach from around 9am to 3pm, go home, pick up the kids from daycare and plop on the couch.

After that, I either read/write/edit/revise/do what needs to be done. My husband cooks, thankfully. It’s something I really do not enjoy doing. After that it’s time to get the kids ready for bed, and depending on how tired I am, I do something for myself and go to bed at 9pm.

I am currently working on Dance of Despair, book 2 in the Ilvannian Chronicles, although by the time this goes online, I wouldn’t be surprised if I have started on book 3!

BREAKING NEWS: Dance of Despair will be available to buy on 27 February 2020!

This a cover reveal for Dance of Despair book 2 in the series, releasing 27 Feb by Kara S Weaver. At the start of Feb, I reviewed book 1, Crown of Conspiracy and tomorrow’s blog post is a Behind the Book interview with Kara S Weaver. Link to my site in my bio. Repost from @kara_s_weaver using @RepostRegramApp – 𝐑𝐞𝐚𝐥 𝐛𝐞𝐭𝐫𝐚𝐲𝐚𝐥 𝐧𝐞𝐯𝐞𝐫 𝐜𝐨𝐦𝐞𝐬 𝐟𝐫𝐨𝐦 𝐞𝐧𝐞𝐦𝐢𝐞𝐬. When Shalitha’s life takes a dramatic, and dangerous turn for the worse, she must reconcile her new life with the old. Struggling to survive in a foreign country while adjusting to new rules and traditions, she longs for home. Alone, enslaved, and with nobody to trust, she sees no way out, until she meets an enigmatic stranger who makes it his mission to help her. But is he who he claims to be? ⠀⠀⠀⠀⠀⠀⠀⠀⠀ When the new tyrant queen of Ilvanna directs her focus at Talnovar, his will to survive is tested beyond compare. Facing his past is only the beginning. Abandoned by his friends, Tal has to push himself further and harder than ever to outsmart his enemy and honour the wishes of a dead queen. If that means relying on the help of his enemy, so be it. ⠀⠀⠀⠀⠀⠀⠀⠀⠀ ******* ⠀⠀⠀⠀⠀⠀⠀⠀⠀ Conspirators! Behold the cover for Dance of Despair, the second installment in the Ilvannian Chronicles. Filled with love and hatred, hope and despair, trust and betrayal, this story takes you on an adventure. What happened to Tarien Shalitha after she was kidnapped? What will Talnovar do to get her back? ⠀⠀⠀⠀⠀⠀⠀⠀⠀ ******* ⠀⠀⠀⠀⠀⠀⠀⠀⠀ 𝘾𝙊𝙈𝙄𝙉𝙂 𝙎𝙊𝙊𝙉 ⠀⠀⠀⠀⠀⠀⠀⠀⠀ ******* ⠀⠀⠀⠀⠀⠀⠀⠀⠀ ⠀⠀⠀⠀⠀⠀⠀⠀⠀ 𝐏𝐥𝐞𝐚𝐬𝐞 𝐒𝐡𝐚𝐫𝐞 𝐭𝐡𝐢𝐬 𝐁𝐞𝐚𝐮𝐭𝐲! ⠀⠀⠀⠀⠀⠀⠀⠀⠀ ******* ⠀⠀⠀⠀⠀⠀⠀⠀⠀ #coverreveal #bookcoverreveal #bookstagram #bookish #booksofinstagram #booksbooksbooks #booknerdigan #readersofinstagram #readersofig #readingcommunity #nextread #whattoreadnext #mustread #fantasynovel #newadultfantasy #fantasybookseries #fantasybooks #writingcommunity #writerscommunity #writersofig #ampublishing #writinganovel #indieauthor #indiebooks #danceofdespair #booklover #bookworm #bookaddict #bookcommunity #behindthebook

Where can we find out more and buy Crown of Conspiracy?

If you follow me on Instagram @kara_s_weaver or go to my website www.karasweaver.com you can find more information about the The Ilvannian Chronicles. Crown of Conspiracy is available on Amazon as paperback, ebook and even on Kindle Unlimited.

Behind the Book:  Gem of Meruna by Elexis Bell

If you enjoy this, you should check out: Why I have chosen to Self-PublishA decade of writingMy plans for 2020To discover more ways to connect, click my link tree.

4 thoughts on “Behind the Book: Crown of Conspiracy by Kara S Weaver”