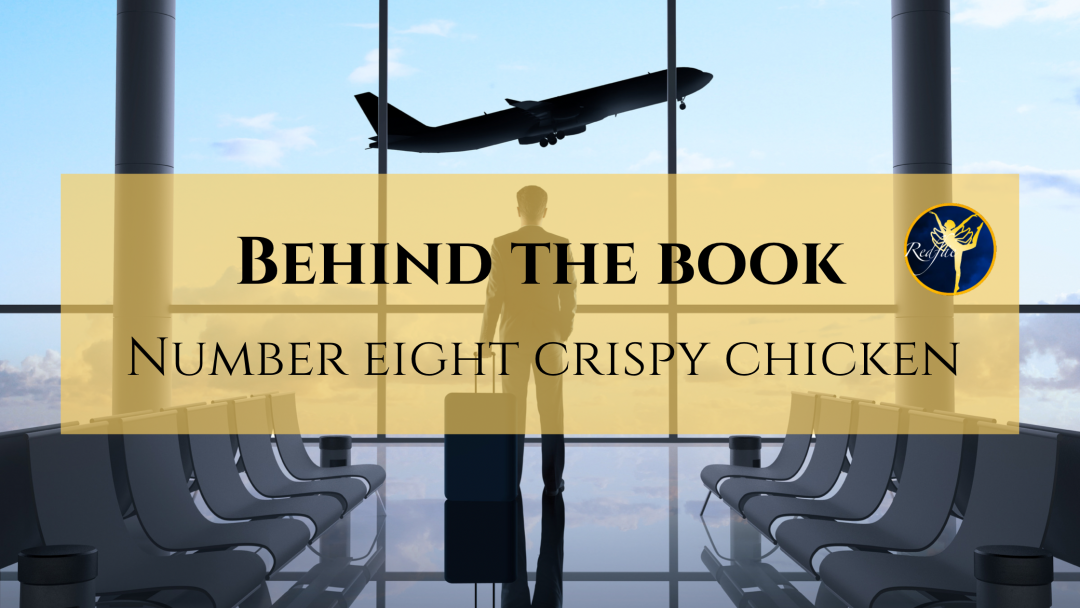 I feel so honoured to get to share with you a behind the scenes of Number Eight Crispy Chicken, a novel by Sara Neofield. Here is the book trailer:

What inspired you to write Number Eight Crispy Chicken?

I was inspired to pick up writing again after a long hiatus when I was stranded in an airport due to a cancelled flight. The resultant book – about a hotel inspector – was terrible, but it rekindled my love of writing.

The next time I was stranded in an airport, I wrote about the experience, and wondered what character might benefit from being in that situation. That’s when I hit upon the idea of an immigration minister, trapped in an airport.

For years, the right to seek asylum and the fair, compassionate treatment of asylum seekers has been an interest of mine. But in my conversations with others, I found there were other, competing stories out there, which demonised those seeking refuge. To my dismay, otherwise kind, decent people seemed to believe the narratives peddled by those in power who seek to divide us.

The overall goal of my writing is to use humour to get readers to engage with the kinds of topics that are hugely important, but which we might otherwise ignore. Sometimes the world’s problems can seem insurmountable. Like there’s nothing we can do, so why even bother.

That’s why hearing that someone read my book, and changed their mind even a little about, for example, treating our fellow human beings with compassion, brings me great joy.

You enjoy travelling – which countries have you enjoyed visiting most?

Since leaving my job as a university lecture a few years ago, I’ve been fortunate enough to visit sixty different countries. Every single one has taught me something.

I think every country has its strengths that others could learn from – I especially love visiting unique museums that teach you something about one aspect of a place in depth, like the rainwater ‘theme park’ in India, or the butter museum in Ireland.

Choosing one or two places I’ve enjoyed visiting most is really hard, but Japan always holds a special place in my heart since I spent a year on exchange there when I was growing up, and I love to go back and visit my “second family”.

What genre is Number Eight Crispy Chicken this and do you read similar books?

I would consider Number Eight Crispy Chicken to be a sort of literary, satirical book, or perhaps even a social novel. I can’t say I’ve read any books exactly like it (which is why I had to write it!) but I was inspired by the works of Robert Tressell, Margaret Atwood, Charles Dickens, and Kurt Vonnegut.

One early reader told me Number Eight Crispy Chicken reminded her of 1984, which of course thrilled me! In terms of humour, I love British comedic writing (I’m a big fan of Terry Pratchett, Douglas Adams, and of course, PG Wodehouse!)

How long did this novel take from the first idea to publishing?

From the moment I started tapping out words in the airport hotel which bears a striking semblance to the one Peter enjoys, to the release date of January 2020, three years, almost to the day!

Why did you choose to self publish?

I have wanted to be an author ever since I can remember. When I started school, my class was tasked with creating fabric representations of ourselves in the future for a quilt. I created a rather detailed rendition of myself as an author, painstakingly drawing in all of the individual pages in the stack of books my future self had apparently written. Unfortunately, one of the mums helping the class deemed it ‘too fiddly’ to cut out of cotton, and suggested something easier, like a checkout operator at Target instead.

As things go, I didn’t end up working at Target (which is probably a good thing, considering the only Target in my hometown closed down!). But I did end up writing a book. Several, actually.

After completing my PhD in Linguistics, I wrote and edited a number of academic books, book chapters, and journal articles. While I still love research, my heart was still with fiction, which was why, after a number of years of hard-core saving and investing, when my husband and I finally quit our jobs to travel the world, I returned to my first love, creative writing.

As for why I became an indie author specifically… Like many authors, I began by sending my manuscript out to publishers. I knew I didn’t want to send my work to a large publisher from the start, but I became increasingly uncomfortable with the idea of even a small publisher having control over my work as time went on. While I completely respect the work of those in the publishing industry, I wanted to write something a bit different. It was a feeling I’d experienced before, and I knew that I had to be brave and go down the indie path.

Peter shoved his way to the front of the queue, and with a flash of his Priority Clearance card, tossed his luggage onto the belt. As the X-ray machine swallowed his bag, airport security eyed Peter’s cardboard tube. ‘You’ll have to open that up,’ the agent prodded at the sticky-taped plastic lid.

Peter peeled off the tape, his stubby fingernails scraping against virgin cardboard. The plastic lid popped, like on a bottle of soda.‘See?’

‘You’ll have to remove the contents.’

‘This is ridiculous!’ The new security measures meant Peter had needed to arrive a full three hours early to be metal detected, swabbed, patted down, and sniffed. Surely his Priority Clearance status should afford him better treatment. He’d have to ask Percy when he got back to the office.

What novel are you working on now?

I’ve got a number of projects on the go (I’ve always been a hopeless multitasker!) but the project I’m most excited about is called Propaganda Wars.

Propaganda Wars is about cousins who, growing up in a city separated by ideology, split into two opposing countries by a formidable wall, one day meet – and how they perceive life on the other side.

It’s inspired in part by my travels through the former Soviet Union, Yugoslavia, and modern-day socialist Asia – countries which, when I was born, were out of reach – and in part by the surreal world of today’s fake news, ‘reality’ shows, ‘social’ media and hyper consumerism, and the firewalls and bubbles of today’s internet landscape.

What is a typical day in the life of author Sarah?

Since leaving my job to travel, my ‘typical day’ is really quite variable, but it usually involves budget accommodation, finding something to cook, learning to speak or at least read a bit of the language around me, and sometimes, a long-distance bus or train trip.

I enjoy reading and writing (of course!) but also exploring in my travels – both usual sightseeing activities, and exploring abandoned places. To date, some of my favourite explorations have been an abandoned theme park, tuberculosis hospital, bobsleigh track, and an airplane graveyard.

Tell us an interesting fact about your novel?

I read over a hundred books, articles and websites in order to research Number Eight Crispy Chicken. While the story is light-hearted, and the characters and institutions depicted are entirely fictitious, the policies and events presented are sadly grounded in real life. (You can find out more at https://www.sarahneofield.com/resources/)

Where can we buy it and find out more about you?

You can find out more about me on my website sarahneofield.com where you’ll find a free sample of the book, reading guide, and resources.

If you enjoyed this, you will enjoy:

Book Review: You stole my heart… Do I have to take your name?

What Banned Books Week is all about

5 thoughts on “Behind the Book: Number Eight Crispy Chicken by Sarah Neofield”