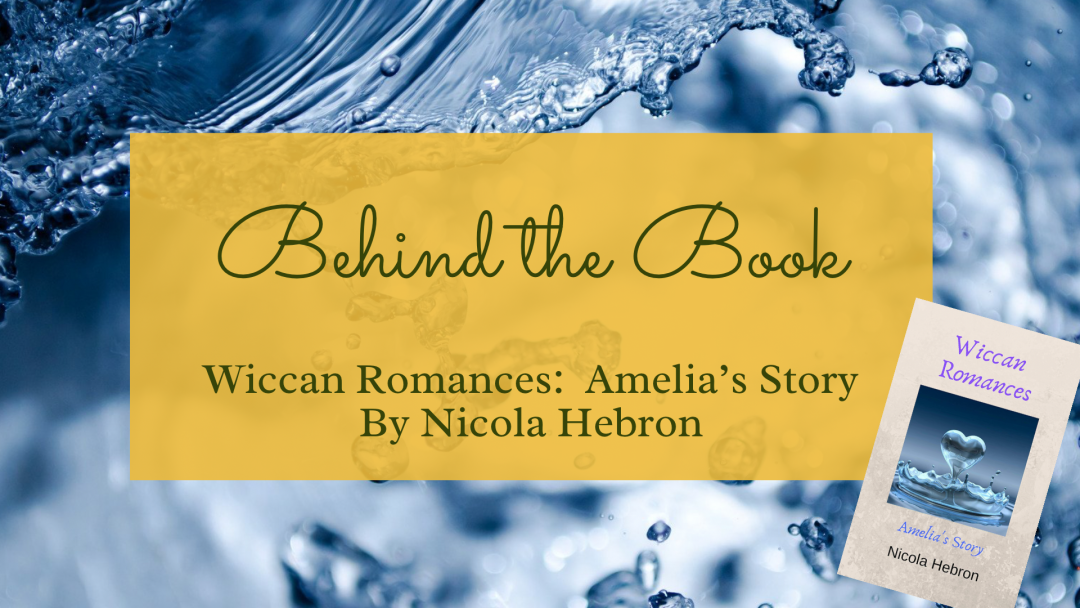 I enjoyed Nicola’s novel Amelia’s Story, the first book in her Wiccan Romance series. She kindly agreed to a Behind the Book interview about her novel, and here it is.

This is your first published novel but what’s the first story you remember writing?

I remember writing a book during what I think was about year 9, so when I was around thirteenishthat had a couple of similar themes to Amelia’s Story but it wasn’t magical. It focused on relationships as they fascinate me, the way people become a couple, the obstacles they overcome and just how happy people become when they start dating someone they really like, the characters were a bit younger in that book so it had more of a school setting but, at least in the UK, that period at school from when you are fourteen to eighteen you change so much and it’s when you start to really think about your future so it’s such a fascinating time to write about.

Did you know you were writing a series from the start?

Amelia’s Story was initially just supposed to be a short story that I used to write when I had a couple of spare hours during my A Levels and while at University. It was only when I went back to it when someone suggested I use writing to help me deal with my anxiety that it became a full length novel and then a series when I came up with ideas for the brothers and I just fell in love with all the characters.

The first bit of inspiration came from a Nora Robert’s book I was reading, it was a magic based book and I just really wanted to try my hand at writing one. Also it was during a snow week and I was supposed to be writing my history coursework but obviously decided to procrastinate. I picked up the story nearly eight years later as I still had the story running around in the back of my mind for years and I finished it nearly a decade later and I’m really proud of it.

Why did you chose to become an indie author?

Between calls at work I would look at the best way to publish my novel, studying which publishing house would be most likely to publish it, however I spotted Amazon KDP and the more I learnt about it the more I decided it was a better option for me. I then spoke to a number of other indie authors and decided to give it a go.

Tell me about a typical day in the life of Nicola Hebron?

Well, I have recently been diagnosed with Fibromyalgia so my days are pretty lazy as I need to keep as relaxed as possible to keep the pain at bay. Usually I write on and off throughout the day, usually twenty minutes at a time then I take a break and watch TV, at the minute I’m watching the Chicago franchise, which Dick Wolf executives produces and I’m a big fan of his shows. I also love reading, I always read in the bath and usually for about an hour at night.

Some of your main characters have elemental magic. Which elemental power would you most like to have?

“Ben didn’t expect you out here!” Aidan called out, as he followed his dog out of the bushes.

“Lia was walking the dogs, thought I would give her a hand.” Ben explained, as he shook his friend’s hand.

“Hi.” Lia mumbled, as she continued to pet Buster.

Lia stumbled backwards as Buster leant his full weight against her legs, causing Aidan to grab his dog’s collar, pulling him away from her. Smiling, Lia shifted so that she could focus on the dogs and look at Aidan without being obvious. He looked at ease, wearing a pair of faded jeans, black shirt and unzipped grey hoody. She had known Aidan for years and had a crush on him for nearly as long. Consequently, whenever he was around, which was a lot of the time as he was Ben’s closest friend, she turned into either a babbling idiot or a mute. Lia glanced down at the dogs when Aidan looked over at her and busied herself taking off Betty’s lead.

“That’s easy, Aidan. I’m going to get little Miss Princess goody two shoes to give up her powers by convincing her that the only way I’m going to release you is if she gives her powers to me.” Alice crowed. “And then, using both her powers and those that our family has managed to hold onto, I’m going to make you love me, leaving her with nothing.”

Amelia’s Story is available at all major online booksellers, including Amazon, Waterstones, WHSmiths and Barnes and Noble. It is also available in ebook format, including Kindle, Kobo, Nook and Ibooks.

3 thoughts on “Behind the Book: Wiccan Romance – Amelia’s Story by Nicola Hebron”