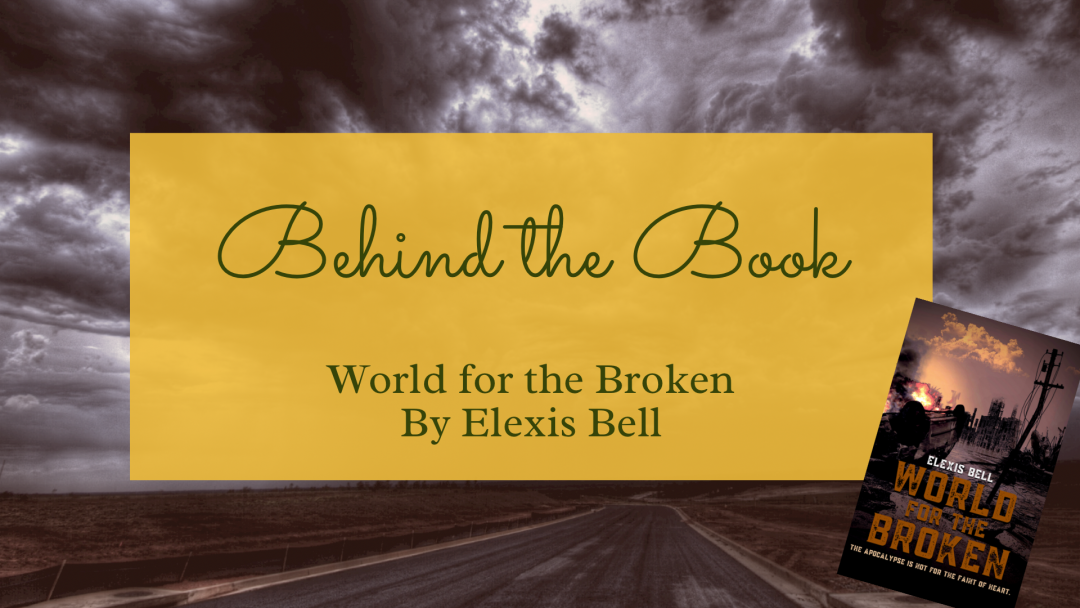 Elexis recently released World for the Broken. Doing another interview was a wonderful way to end our series on interviews. And, Elexis agreed.

How are your coping during C19?

I feel guilty, but I’ve been enjoying this. I get to stay home from a dangerous job that I don’t exactly enjoy, with a built in excuse not to socialize and tons of time to work on my books.

At first, it was nerve-wracking, because it took three weeks to get an unemployment check and money is a huge stressor for me. But we finally got it sorted, and now I can relax on that front.

What inspired World for the Broken?

This one is hard to narrow down, so here’s a few favorites.

What three things could you not live without?

As far as apocalypse survival is concerned, food, water, and warmth. Not in that order. Lol. Otherwise…since we’re talking things and not people…idk. I’m fairly adaptable and can usually make do. I have habits and things I prefer to surround myself with, but if it comes down to what I can and can’t do without… I can make do with what I have. My imagination is usually enough to get me through a rough patch.

Could you survive in your broken world?

If the apocalyptic situation were similar to the one in my book, probably. I mean, I can’t say yes, without a doubt, because there’s always the chance for some unknown, but my husband and I have bug out bags, food stores, weapons, and a pretty decent ammo cache.

We live near a nature preserve, so hunting and fishing wouldn’t be a problem. And we’re in a small town. Fewer people means fewer people that could be terrible. It also reduces mob mentality.

Plus, I’m at a decent build/weight for the apocalypse. Strong with decent stamina. A bit of insulation to carry me through between meals, but not so much as to slow me down if I need to move.

I may have thought this through a bit too much.

Tell us a little about the three main characters?

Well, Chloe is a survivor. She’s independent (sometimes to a fault) and resourceful. She’s skilled in combat and handy with a gun. Growing up on a farm showed her the value of hard work, but tragedy pushed her away from other people. Now, after the apocalypse, she has to decide if she can let someone new in.

Christian grew up in a broken home. He tried to spare his brother pain at the hands of their parents, and now beats himself up over the monster his brother turned into. And his death.

Karen was once a bright, optimistic preschool teacher. She had a happy home as a child, and wanted to provide a similar life for her own son. But then, the apocalypse saw her forced into a brothel and beaten by the husband she once adored. And her spirit started to break.

“So, you’re just giving those antibiotics to me? And helping me…without expecting anything in return?” I ask, allowing some of my skepticism to show through.

“No. I’m asking for something.”

Chloe’s response unsettles me and eases my mind at the same time. After all, it is the end of the world. Everyone expects something in return. For some reason, I’d just been hoping she was better than that.

Somewhat wary, I ask, “What do you want?”

“Don’t make me regret this.”

Five very simple words, ordinary in every way and wholly within reason. But something in her eyes makes me believe she’s taking a much bigger chance on me than just helping out a stranger in the apocalypse.

Where can we find out more and buy your book?

My website has information and links for all my published works, as well as little tidbits about my WIPs. My blog is chock full of (blunt) writing advice and updates on all my work.

All my books are available on Amazon, and can be found on my Amazon author page.

Behind the Book: Annabelle by Elexis Bell

Where To Find The Best Indie Books

2 thoughts on “Behind the Book: World for the Broken by Elexis Bell”