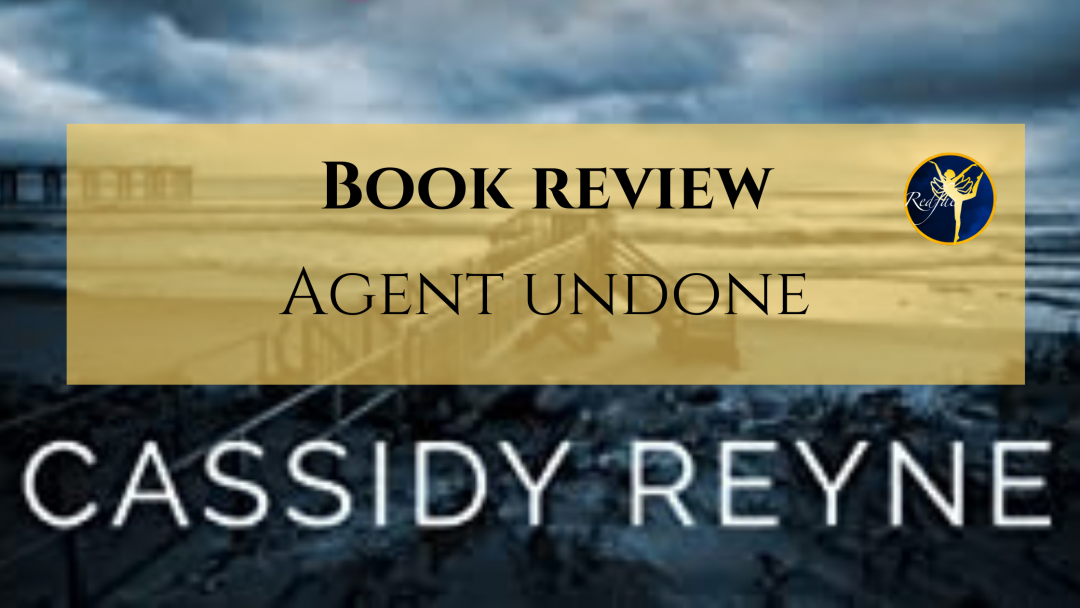 I love Cassidy. She has a big heart and its no surprise she writes romance. If you don’t follow her on social media you’re missing out.

Cassidy always says the perfect thing when someone needs picking up. She helped with my blurb and novel. I’ve never read romantic suspense before, but for her I wanted to.

I’m struggling to find time for myself and to read, but I’m now halfway through this Romantic Suspense #agentundone by @cassidyreyne . 💛 The first half of the book builds the tension between the two main characters. It splits between their view points to give a deeper insight of what’s going on. Maddison is a survivor of sex trafficking and always looking over her shoulder. Whereas Carter is an agent recovering from an injury obtained during his last mission. He’s a love ‘em & leave them type of guy and can’t wait to get back in the field. They are both staying in temporary lodges on a picturesque beach. 💛 I’ve just started the 2nd half and it has got a lot darker. The pair have lost touch but I’m desperate for them to meet again. They need to, for Maddison’s sake. It seems she was right to worry about her past catching up with her… 💛 #currentlyreading #romanticsuspense #beachread #humantrafficking #romancebooks #cassidyreyne #romancereadersofinstagram #romancenovels #romancereader #romancebookstagram #romancebookworm #romancebookaddict #runaway #inhiding #bookstagram #bookstagrammer #romanticsuspensebook #romancereads #romanceauthor #iloveromance #tbr #currentread #ebook #kindle #kindlegram #wiwbooks #allindiebooks

If you don’t like spoilers, scroll quickly to my final thoughts.

Carter is an agent that got injured during the last mission. He’s now renting a cabin by the coast whilst recovering. In addition, he is hear broken over a colleague/lover that died. He has a lot of emotional stuff to process and doesn’t want a relationship. While he rests up, his best mate/colleague, Nate, let’s him stay at his beach holiday home.

Maddison writes articles about women in abusive relationships. It’s a topic very personal to her as she barely escaped her ex, Konrad, alive. Now she lives in fear he may one day find her. Maddie is renting the cabin next door to Nate’s, where Carter is staying.

Both characters are private people. Carter needs to maintain secrecy about who he is and what he does, and Maddison is constantly checking over her shoulder for her ex or one of his goons.

They enjoy running up and down the beach, and soon start doing this together. Carter is attracted to Maddie but doesn’t want to get involved woth anyone. He tries to manage his sexual urges with a few one night stands, careful to pick girls that won’t get close. The more time he spends with Maddison, the less effective his cold showers become.

Maddison has to visit her employers head office to collect her pay checks. Little does she know, but during this trip she is spotted by a goon. And despite her careful precautions, she’s now being followed back to the beach hut.

Carter’s leg has healed and he’s approved to return to duty. He’s to be an undercover agent to catch a sex and drug trafficking ring. Carter feels bad that he couldn’t say bye to Maddie and asks Nate to check on her.

Nate reports that Maddie has gone, and Carter accepts he is unlikely to ever see her again.

Carter is making progress fooling Konrad, the suspected boss of the ring he is investigating. Carter doesn’t know what to think when Konrad parades his girlfriend around his sleazy club, and Carter recognises her as Maddie.

There are lots of misunderstandings between the pair. Carter assumes that Maddie was helping Konrad get girls and after the bust, he wants nothing to do with her.

Fate causes the pair to cross paths again, it’s messy and they’ve a lot of baggage to unpack. But, there isa HEA and a very steamy sex scene .

This was a great read. It has some very steamy scenes but brought together with a strong plot. The characters are very complex, with rich back stories that feeds into who they are.

It’s only in recent years I’ve become aware of that domestic trafficking takes place. Cassidy sensitively deals with this topic. She shows how it has shapes Maddie and affected her life. The early chapters made me feel uneasy every time Maddie left the safety of her cabin. Carter also has complex issues to resolve. Their hesitation to get involved in a romantic relationship is very real.

There where times I wanted to knock Carter’s head but I think he was scared of the truth, as he was scared of getting close and losing someone again. I read the las chapters really fast as I loved when he starts to get over his fear and get honest with himself. He needs the truth, and he needs Maddie. Such a satisfying ending.

I’ve not read romantic suspense before. The suspense made me feel on edge and anxious. It was refreshing to try something different. I loved how developed the characters were, and obviously the way the steamy scenes made me feel.

If you enjoyed this, you’ll love:

Behind the Book: The Sentinels series by Cassidy Reyne

The Making Of The Blurb for Ocean Heart

Book Review: Out Of My League by Sarah Sutton