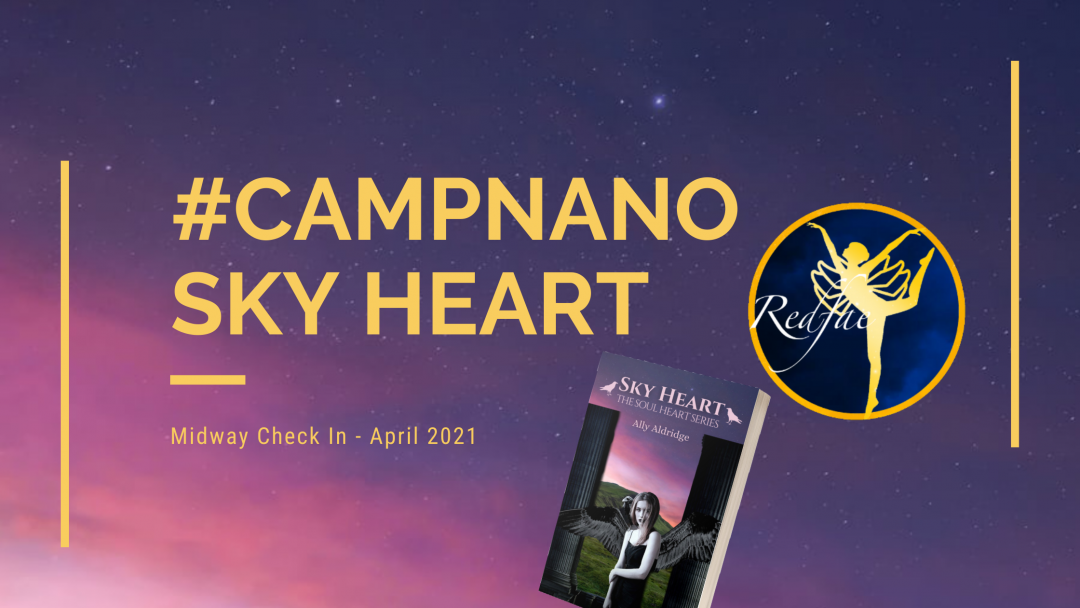 Here’s my Camp NaNo writers diary for the first half of Camp NaNo.

WIW are also doing snippet challenge on IG to give people an excuse to share her the projects they are writing.

Each week there is a prompt, and you post a snippet from your WIP on that theme. I’m a rebel and posting on different days. But, I’m determined to do them all within April.

I caught a Writing Sprint on Facebook hosted by @unstoppableauthors . It helped me make a good start on my goals, achieving 1k words. I’m going to look out for this sprint next week.

The sprint was hosted by Urban Fantasy author H B Lyne and dystopian author Angeline Trevena. Both also have published writing resource books.

Busy day today. I took my son to play in the garden of a friends house. It was really cold and we couldn’t go inside due to the pandemic rules.

My husband found my long lost Kindle. It needs charging but I’m so happy to have it back.

I managed to write 500 words today. I am so close to the end now but took a break as I’m struggling to picture the big fight scene.

I finished reading A Heart of Salt & Silver. Look out for my full review next week. A short version is already on Goodreads, Litsy, and Amazon.

I went to Homebase to get paint for some redecorating we’ve been talking about for ages.

Didn’t feel well so I went to bed early. Good news was my Kindle is charged, so I watched The Wilds on Prime.

I cleared out my son’s bedroom and did masking tape. His room was the first we decorated when we moved in. At age 5, he peeled off the animal stickers as he said they were to babyish, and we promoted to redecorate… 2y later, we are doing it.

My son is a bit nervous about not sleeping in his room. He doesn’t like change. But, he’s excited to see his new grown up room tomorrow.

Still not feeling great, so had another early night. I didn’t write but I did a lot of research and practicing a new skill, that I’m hoping to sell one day. I was creative, but not with Sky Heart.

I had work all day today but managed to write 500 words for Sky Heart. I have roughly three major scenes to go but these are big ones and pretty tough. I’ll admit I feel intimidated.

I’ve done some brain storming for the big battle but still can’t see it clear in my head. I can however see the ending, so I may jump ahead to that.

I worked more on my secret project. I also worked on prepping images for my IG feed.

This evening I watched the WIW Live with guest author Kara S Weaver. They chatted about editing, the different types, and why it’s important.

Today has been pretty chilled out other than my phone screen cracking.

I won a free call with Pagan Malcolm, who coaches authors to take their careers to the next level. I’m booked in next week, early Friday morning (although for her, I think it’s late). I’m not sure what to expect – should I get her to help with my battle, public speaking, or my secret project. Whatever we get up to, I’ll probably blog my experience.

I watched the replay of a masterclass I recently attended on how to write a 5 star ending. Then I watched a live author chat from the fantasy writers festival, QuaranCon2021.

Once the kids were in bed, I used an app to animate my characters created in Art Breeder, to sing. Author procrastination at its finest.

Then, I attended a writing chat and Sprint by Unstoppable Authors hosted by H B Lyne and Angelina Trevena, and wrote 478 words.

This was a bad day. First, my 2 year old threw my mobile phone and the screen cracked. I use my mobile for everything but can’t afford to fix it, so I’ll have to carry on and hope it doesn’t get worse.

Then, I received news that my daughter isn’t getting a place at our chosen nursery. She was on a waiting list for morning sessions which fit around my work & childcare availability but they only have afternoon sessions. To accommodate that, I’d have to cut my working hours in half and not only is my employer unlikely to agree to that as it’d make travelling to my appointments within the time very challenging, but I also can’t afford to reduce my hours. I now need to find another nursery or quit my job. There aren’t many nursery’s nearby as most closed permanently during the pandemic for various reasons.

When I’m stressing about a problem I can’t write. I opened my manuscript and stared at the blank page before closing it and trying something creative. I worked on my secret project.

We decided that I’m no stressed enough, so we painted part if the front room. Every chance my 2y old got, she was “help painting”. It was exhausting keeping her away all day, and the house was freezing as we kept the windows open.

I did not write. My head is not in the right place.

So, my 2y old didn’t sleep. She was up at 3am. By 5am I gave up and she attempted to “Help painting.” I’m pretty sure I’m running on empty.

I did make progress on some blog posts and have drafted two Behind the Book posts that I now just need to proofread and schedule. I probably won’t get to this until next weekend.

I also helped my 7y old son to create a cute Woodland scene for school. We borrowed my mum’s Cricut Maker and he created his die cuts in Canva, and I helped him add them to Cricut. I then helped with sticking them down where he told me, while he painted. We spent over two hours on it.

I’m so frustrated. I want to write the fight scene for Sky Heart but it’s not coming to me. I didn’t want to waste my time, so I worked on my secret project.

I’ve found two nurseries that might be able to take Aria. Fingers crossed I can sort this out so I can feel more settled.

I spent most my day playing with Aria, and tidying up. I also completed most of the application form for one of the nurseries.

I accidentally forgot to charge my laptop so it was taking ages to come on even with the charger in. I decided to watch some TV with my hubby.

I worked all day today.

Then, in the evening I wrote 192 words. It doesn’t sound like much but I finally had a breakthrough with the difficult scene and can see it now!

I worked today, and by the time the kids were in bed, it was already 9pm. I attended the World Indie Warriors IG Live. Today the guest speaker was Michelle Raab, chatting marketing, writing dystopia, and psychology.

Why I love World Indie Warriors

Where to find the best indie books…