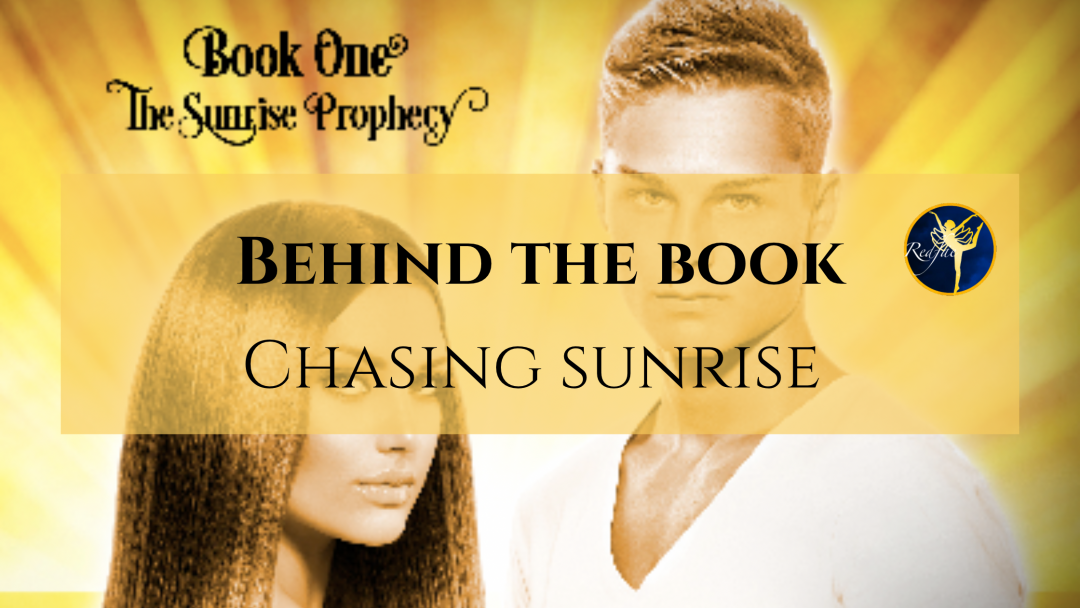 Behind the Book: Chasing Sunrise (The Sunrise Prophecy book 1)by Emily Mah

Thank you Emily for agreeing to a Behind the Book interview about your YA Urban Fantasy book, Chasing Sunrise.

This is book 1 in a trilogy. What can readers look forward to in this vampire series?

Very few vampires, actually, but the series will explain why there are so few. You’ll also learn the origin of vampires and how they fit into Judeo-Christian mythology. These books also set up a world where I plan to write a lot of urban fantasy/paranormal romance, so I hope people like the world-building too!

Can you introduce the MC, Liana?

Liana was a nerdy, quiet, high-achieving, prep-school attending girl who had a weakness for a guy who told her he needed her. Unfortunately, what he needed was her blood, and the way she let him drain her makes her face a lot of uncomfortable truths about herself. She realizes that if she wants to be the strong, independent woman she always thought she was, she has to make hard choices. And when her father is killed and she is left an orphan, the hard choices start coming at her fast.

Can you introduce the love interest, Corban?

He’s more of a cypher to begin with. When he meets Liana he’s very hostile to her, but he also asks her a lot of questions that don’t quite make sense. Despite their rough first meeting, she comes to believe he’s one of the only people she can trust with her deepest, darkest secret. She figures out who he is by the middle of the book. Suffice it to say, it’s complicated.

What drew you to writing a YA novel about vampires?

The one common thread in my romances is making good guys sexy. It really bothers me how many male leads are abusive, narcissistic, reckless, and even criminal, and vampire stories tend to be some of the most extreme in this regard. There’s a lot in these books about what it takes for love to last a lifetime, and selfish, obsessive vampire behaviors aren’t it. While I don’t believe in preaching to anyone, especially young people, nor in writing propaganda, I do think as a writer that it is my job to be honest and to ask hard questions. The YA audience is more than capable of grappling with those.

I think if you like, say, Tamar Sloan or Ilona Andrews or Carrie Vaughn, you’ll probably like these books. They’re meant to be a fun ride with a few heavy topics laced in there. But first and foremost, they should be fun!

The book is set in a boarding school, what was your school life like?

I sat on a patch of dead grass beside Aunt Cassie’s house as the sun rose. My skin already tingled as if I’d rubbed it with heat cream. Even though it was winter and the temperature below freezing, my jacket lay on the ground behind me, leaving my arms bare. With a deep breath of clean, chilled air, I braced myself for the full force of the oncoming pain.

The desert around me was quiet, and I was glad for that. It seemed that every animal I could think of that lived out here was poisonous in some way. Scorpions, rattlesnakes, various types of spiders—and I wasn’t an outdoorsy person to begin with. I found myself taken in by the stillness of it all, though. There were no birds chirping, or leaves rustling in the wind, no distant sound of cars whooshing down the road, or buzz of an errant porch light attracting insects.

There was just the broad, flat Taos Valley with its deep, jagged line of canyon in the distance, and beyond that were the mountains, their sharp angles softened with a layer of evergreen trees. Now the sky was turning a deep, vivid pink with wispy clouds looking like they’d caught fire.

I felt more than saw the sunrise. One moment my skin burned with an annoying tingle, and the next it felt like I was laid out atop a hot griddle with molten metal poured over me. I was certain that my flesh was being incinerated this time, but I’d thought that last time and the time before. Clenching my teeth and holding my breath, I waited for the sensation to break. It had before, so it had to this time. Still I gripped my small gold cross pendant and prayed to any deity who would listen. I begged, mentally, for forgiveness for my weakness. Please, give me another chance, another day.

Tears leaked from my eyes, and that was the first sign I had that the pain was abating. Their cool tracks down my cheeks quenched the fire and that sensation spread across my face and down over the rest of my body.

And then it was all over, the external pain at least. It was just me, the silent desert, and the yawning chasm of emptiness I felt inside. Tears didn’t ease that pain though. It was bottomless.

The buy link for the book is: https://books2read.com/Chasing-Sunrise

The below are affiliate links. Read Affiliate Disclosure page for more info.

Behind the Book: Wiccan Romance: Amelia’s Story by Nicola Hebron