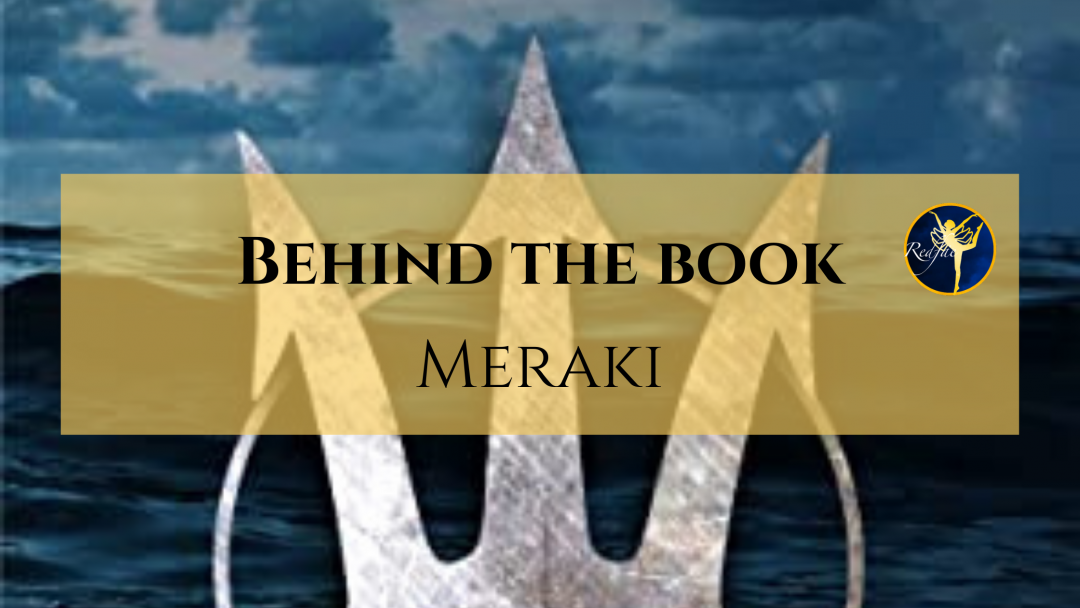 This book is on my pile for June reads, and I’m so lucky that Naomi also agreed to an interview about her book with me.

Meraki is book 1 in your The Syren Story series. What can readers look forward to in the series?

The Syren Stories begins with Meraki when our main character Wren swims away from the greatest threat in the seas. She believes she’s safe until she’s captured within King Kellan’s large net. After hauling her aboard and shipping her back to his Kingdom, we learn that the young King plans to use Wren’s syren song for his own benefit. As the story unfolds, Wren discovers she cannot run (or swim) away from her problems for very long, and as history begins to catch up with her, she must ask herself who is her true enemy? And what the Hel do the gods have planned?

And in Kairos, the adventure continues.

With winter passed and spring arriving, everything appears to be going swimmingly- that is until an arrow knocks Wren out of the sky.

When the mortals she defeated last winter come seeking retribution, she learns that although these mere men are not immortal, they have no problem biding their time.
Revenge, after all, is a dish best served cold. And forgiveness is a gift which can swiftly be retracted.

Full of mythology, magic, mermaids, and fantasy favourite tropes such as enemies to lovers and chosen one, the Syren Stories are sure to float your boat.

Can you introduce the MC, Wren?

Aside from being a syren, Wren is strong-willed, tenacious, and altruistic. Although she appears ruthless and unyielding to some mortals, it’s Wren’s desire to cause no harm to people which sends her fleeing Seven Spikes to begin with. Whilst most mortals would flee screaming at the sight of a centaur or harpy, Wren takes her fellow citizens in her stride and it’s only her inner demons which seem to terrify her.

In my book, Syrens are the ruling faction amongst all the creatures who live above and below the waves. They primarily reside in the Water World Queendom within the underwater caves of Seven Spike, but they can slip off their tails crafted from kelp should they want to visit land. Upon leaving the seas, they experience a transition period as the gills which line their sides shut and their lungs readapt to land breathing. During these few minutes, syrens are at their most vulnerable as they are unable to swim or run, nor can they use their legendary songs to protection.

Their veins are full of ichor due to their lingering link to Poseidon, and this means they cannot lie. Syren’s are bound to be truthfully and any vow they make must be upheld unless they want to face their dire consequences which Wren learns the full extent of when she breaks a binding promise to Kellan.

I see book 2, Kairos is out.  How many books do you anticipate in The Syren Story series?

The Syren Story series is composed of two books, Meraki and Kairos. I’m currently working on a companion novel which will follow two fan favourite characters as they explore their lives after the events of Kairos.

There’s a gigantic disturbance in the water halting most of the singing syrens. Waves smack against nearby rocks as water is displaced by something deep down below. A grin unfolded across my mother’s face, as a plump, slithering body breaches the water.

Ugh, I pray to the gods she has not brought a plague of eels with her.

A flash of lightning splits the sky, as the beast splits the water. As it unfolds itself from beneath the waves, water rushes off its endless blank scales.

Through the darkness and sheets of rain I cannot make out its form, but due its limbs and size, it’s definitely not an eel.

Another flash of lightning illuminates the beast.

“Is that…” Kellan’s roar trails off as we are cast into shadow from the monster.

Was this your first published book and why did you choose to self-publish?

The first book I ever published was Trial by Obsidian, back in 2019. This magician story is currently being given a make-over as I have since learnt map designing skills and would love to give readers a visual insight into my fantasy world. Being able to alter my books and have control over cover-art as well as better royalties was a big factor when I was deciding my publishing route. Self-publishing was the right choice for me, and although it can be an overwhelming process at times I’m incredibly lucky to have a support network of other indie authors and loyal readers.

What advice do you have for any aspiring author?

My advice would be to not get overwhelmed with the full story, and instead break the process down into bite-sized chucks. Writing a whole book (or series) is a huge task but writing one page a day is much more achievable. Remember that even the biggest authors in the world take days off so don’t be too hard on yourself if the creativity doesn’t always flow easily.

Where can readers connect with you and discover more about your books?

Meraki and Kairos are avaible on Kindle for eBooks and Book Depositry and Amazon for paperbacks!

Below are affiliate links to buy Meraki. To learn more about these, please visit my Affiliate Disclosure Page.

If you enjoyed this, you

Behind the Book: Tenebrasco by Hannah Read

Why I love YALC

One thought on “Behind the Book: Meraki by Naomi Kelly”