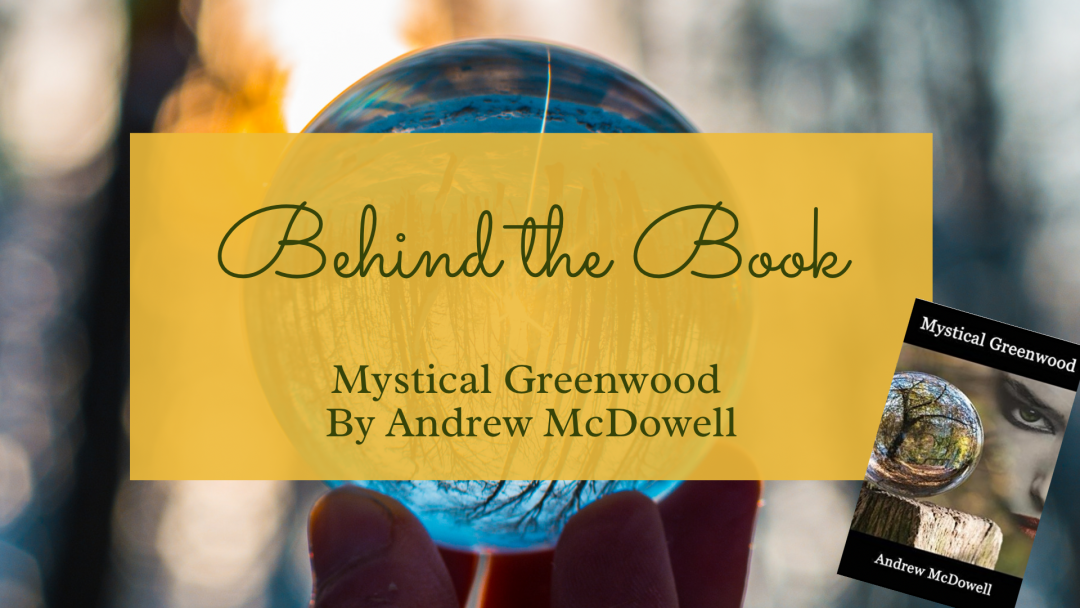 Behind the Book: Mystical Greenwood by Andrew McDowell

What inspired you to write Mystical Greenwood?

I originally set out to write a horror story, but as I was writing it I realized the story elements were leaning towards fantasy, so I went with it. I didn’t initially intend for the overarching theme to be about Nature and its sacred value, but as I did research on magic and fantasy, I recognized my interest in natural magic and mythical creatures, which I think was rooted in a childhood passion for learning about wild animals.

Can you name any similar books to Mystical Greenwood?

That is difficult for me to say. My research consisted mainly of reading books about myths, magic, and Nature-based spirituality rather than works of fiction. However one reviewer not long ago said fans of author Christopher Paolini would love Mystical Greenwood, so perhaps The Inheritance Cycle. It’s also a story of a fellowship travelling together, so you could say it’s similar to The Hobbit and The Lord of the Rings (interestingly, early drafts had many other magical creatures, including elves and dwarves, but they were dropped as it was getting too crowded).

How long did the book take to write from the first idea to publishing?

Oh, it took many years on and off. School was the main reason why I kept taking breaks, as I had to focus on my assignments, and also later on, job hunting. It took many years of writing and rewriting, as well as getting feedback from beta readers as well as through critique groups.

I’m planning for the One with Nature series to be a trilogy. I wouldn’t say it’s entirely planned out. With the second book right now I have an idea for how I want it to end (I need to figure out how to get there), but it won’t be the end of the story, so that’s what the third book will be for.

I find the key thing to remember when building worlds is to make sure it feels real to the reader, no matter what genre you are reading. Any one of the little factors that go into world building can be a “tumbling block” if it feels too out of place. Stories with contemporary and historical settings (even fictional historical settings) can begin with research into what life is/was like. With science fiction it’s often a good idea to look at modern science and see where it could potentially go (or historical if you set it in the past). In fantasy settings, perhaps ask first what historical periods are similar and blend them with research into mythology and fantasy. Plus, as I mentioned earlier, it’s best not to overcrowd it, so the reader isn’t too overwhelmed.

Which mythical or magical animal do you wish was real?

That’s a tough question, but ultimately I don’t think I would wish for any of them to be real. Several could pose a real danger to humanity, and even if they didn’t, all could face the possibility of being hunted down and/or exploited. Besides, they would lose their mystique I think, even those that are the subject of cryptozoology. Where would we be without myths and magic, and imagination? Some things are best left undiscovered, and some in the realm of magic and myth.

Right now the project I’m concentrating most on is the sequel to Mystical Greenwood. I’m hoping to raise the stakes of the conflict, focus more on aquatic life after having my characters spend quality time in forests, as well as introduce a plot element that the first book lacked: romance.

Where can we find out more and buy Mystical Greenwood?

Mystical Greenwood is available in Paperback, Kindle, and Nook. It can be found on Amazon, Barnes & Noble, Books-A-Million, and Goodreads. The cover art is also available at Deviant Art. It’s also available in the British bookstore chains Foyles and Waterstones.

What Banned Books Week Is All About

12 thoughts on “Behind the Book: Mystical Greenwood by Andrew McDowell”