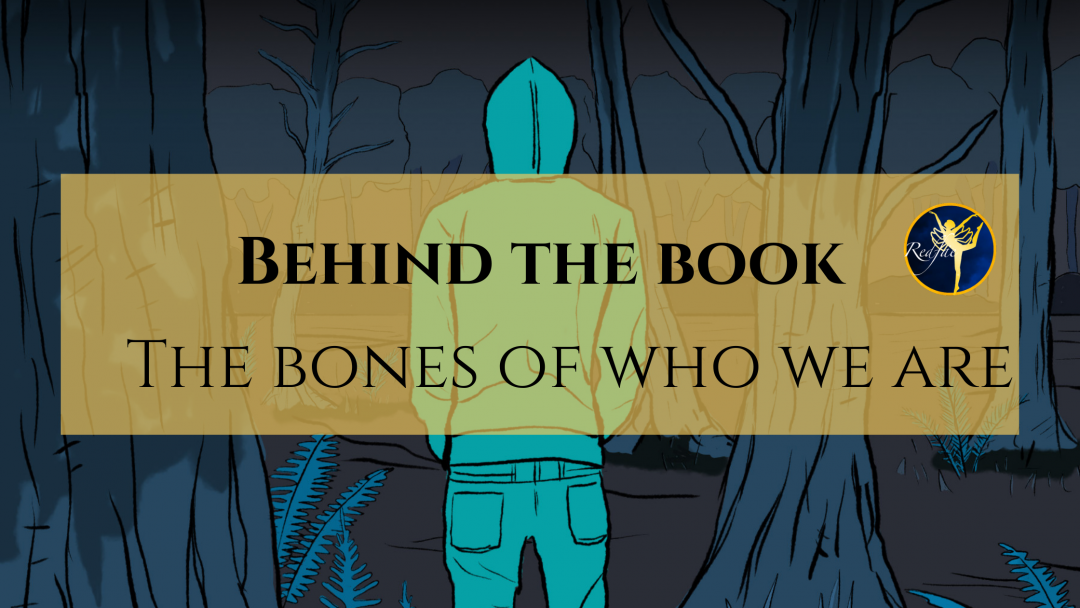 Behind the Book: The Bones of Who We Are by C L Waters

This book is the finale in the Cronus Chronicles series. I will place links for the earlier books in this series at the end of the post. Each interview covers different writing tips and info about the series.

How long did it take you to write this book once you had the idea?

The idea of Gabe’s story came in flashes, but once I finished writing Abby’s and Seth’s stories, Gabe’s story took about six or seven months to write the first draft. Another month or two to rewrite. I’d say the process from drafting through publication took sixteen months.

This book was written after you lost your dad – was it a therapeutic outlet? I notice that it deals with death.

This book explores my grief to some extent, or the ways in which suppressed grief has power over us. Writing Gabe’s story allowed me to process the loss of my father and my own pain. In many ways, I felt stuck like Gabe. When he walks into that childhood fort, I felt like I completely understood his need to hide there, to face death; though Gabe deals with suicide ideation, I think each of us face the symbolic death of self when we face the pain of loss, and then the subsequent rebirth when we find our way out of it. I’m not sure if that makes sense?

Tell me about the character Gabe?

Gabe has faced immense bullying his entire high school career; it’s called The Freak Challenge, and the object is to get Gabe to fight back. Writer of poetry and lover of Abby, he hasn’t fought back because he knows who started the challenge—Seth—and he’s biding his time to get back at his former best friend for the betrayal. His therapist has tried to help him. His adoptive parents have helped him. Even Abby, now, has helped him, but lingering over his head is the knowledge of his real parents and his fear of becoming them. When things spirals out of control and Seth’s life is on the line, Gabe crashes and feels like everything that’s happened is his fault, the fault of the DNA he carries in his body, and that the only way to save everyone else from the monster he’s becoming is to end it.

Each book is a different character from the series story. What inspired these characters?

You’ll see the parallels with the three characters in the Twilight series. Abby-Bella, Seth-Jacob, and Gabe-Edward (though an awesome reader thought Seth and Gabe were reversed which I love too). When I rewrote the books, Abby was inspired by the emergence of Hawaiian culture in my island home. The exploration of how one’s culture informs identity. Seth, as a villain, was inspired by the idea that even the villain has a story. That those either-or dichotomies are often flawed because as people we are a million variations of color. Finally, Gabe was inspired by my daughter who has struggled with mental health. When I read the statistics about males and sucicide rates, I was so saddened, I knew I wanted to explore this further.

When you finished the series you gave it a new look. What was it like relaunching a book and redesigning the covers?

It was hard work (and costly) but I’m so glad I did it. I am so proud of how they turned out, and they are so much more in line with how I envisioned them in the redesign as opposed to the original covers (which I liked too). It’s a lot of work. Finding a cover designer, formatting, learning the ins and outs of publishing in a more hands on way. I don’t think it’s probably a path for everyone, but I’ve enjoyed the process.

Do you design the covers yourself or use a designer?

I hired a cover designer. Her name is Sara Oliver (https://saraoliverdesign.com) and I think she’s amazing. I love working with her.

Vomit up the monster.

It plays with blocks,

Stacking and rearranging them

Around holes in my heart.

The monster crawls back inside

To be vomited another day.

Excerpt from The Bones of Who We Are by CL Walters

My books can be found on any of your favorite platforms. I would always recommend going to your independent bookstore and you can always request them to bring it in.

Discover more about C L Waters on her website.

Behind the Book: The Ugly Truth by C L Waters

Behind the Book: Swimming Sideways by C. L. Waters

Book Review: And The Stars Were Burning Brightly

Why & how I chose my cover designer!

One thought on “Behind the Book: The Bones of Who We Are by C L Waters”